Youth leadership was prominent at the 2018 March. Blue Frontier has always believed that youth are not our future leaders – they are today’s partners in the fight to save our seas. Therefore, we’re opening up a monthly space in Blue Notes for ‘Emerging Voices’ from the ocean youth community. This first one comes from Jens Isenhart, a 16-year-old member of the Goshen, Kentucky chapter of Heirs To Our Oceans. 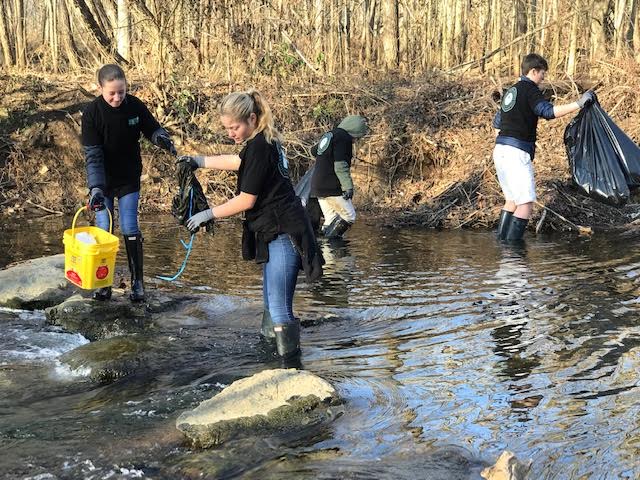 Approximately 8 million metric tons of plastic ends up in our oceans every year. Imagine 5 grocery bags filled with plastic for every foot of coastline in the world! What if our oceans contain more plastic than fish by 2050? We are concerned. And we are doing something about it.

Heirs To Our Oceans in Kentucky will join their fellow Heirs and people around the world in marching for our oceans and waterways on World Oceans Day, June 8, 2019!

We are members of a new chapter of Heirs To Our Oceans in Goshen, Kentucky. Where we live there are few who recycle and few who understand the impact every one of us has on the environment, on our streams’ ecosystems and on the health of our oceans. We couldn’t let that slide. We knew we needed to raise awareness for the health of our water planet. We looked at the global waste issue on a local level and showed how anyone, no matter what age, can make a difference.

Our approach in raising awareness was through setting an example with our own actions, educating people about the harmful effects of toxic waste and getting involved in trash clean-ups. We hoped to empower others inland, here in Kentucky, to become environmental leaders, with a ripple effect!

Already we’ve had a huge impact! We created an inspiring website, held three major creek sweeps and removed truckloads of trash from local streams here in the Louisville area. We connected with biologists in the state and around the country and worked on guided research such as the study on freshwater mollusks that are indicators to the health of our streams. Our greatest achievement so far is the partnership we built with EcoCell, an organization that recycles i-devices such as iPhones (read about EcoCell Louisville online). We organized permanent i-waste collection stations at local school campuses in the North Oldham District now, and we are currently working on changing legislation on e-waste recycling in the state of Kentucky.

We know that we can make a difference for our waters even though we are youth. The health of our oceans and waterways is in our hands!  Join us in raising awareness and March for the Ocean on June 8, 2019, no matter where you are on our blue planet!

Blue Frontier, like the Coast Guard, does more with less. Your financial support early in 2019 will  help us build the next wave of awareness and engagement that will build a Sea Party of solutions for 2020. We will educate voters and citizens on how we can and must restore the blue in our red, white and blue and across our blue marble planet. Please give here or send a check to: Blue Frontier – 301 Commodore Drive, Richmond CA 94804

Thanks and Best Fishes in 2019 from the Blue Frontier team,